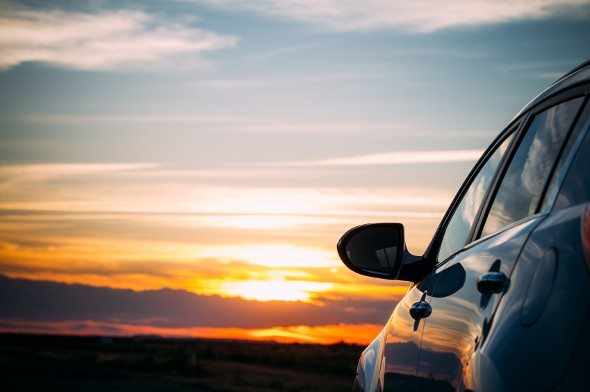 These days, it can take a long time to pay off a car loan. On average, car loans come with terms lasting for more than five years. Paying down a car loan isnât that different from paying down a mortgage. In both cases, a large percentage of your initial payments go toward paying interest. If you donât understand why, you might need a crash course on a concept called amortization.

Find out now: How much house can I afford?

Amortization is just a fancy way of saying that youâre in the process of paying back the money you borrowed from your lender. In order to do that, youâre required to make a payment every month by a certain due date. With each payment, your money is split between paying off interest and paying off your principal balance (or the amount that your lender agreed to lend you).

What youâll soon discover is that your car payments â at least in the beginning â cover quite a bit of interest. Thatâs how amortization works. Over time, your lender will use a greater share of your car payments to reduce your principal loan balance (and a smaller percentage to pay for interest) until youâve completely paid off the vehicle you purchased.

With amortizing loans â like car loans and home loans â youâre expected to make payments on a regular basis according to something called an amortization schedule. Your lender determines in advance when your loan must be paid off, whether thatâs in five years or 30 years.

The Interest on Your Car Loan 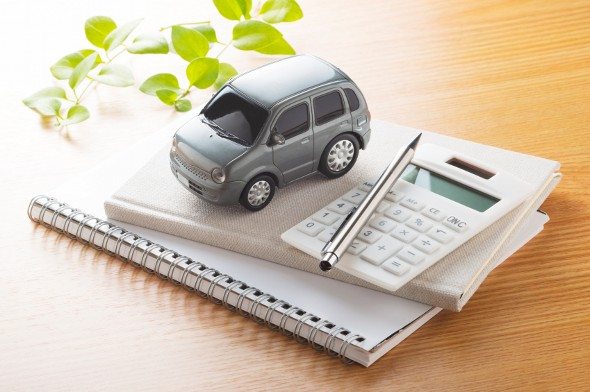 Now letâs talk about interest. Youâre not going to be able to borrow money to finance a car purchase without paying a fee (interest). But thereâs a key difference between simple interest and compound interest.

Related Article: How to Make Your First Car Purchase Happen

The majority of car loans have simple interest rates. As a borrower, thatâs good news. If your interest doesnât compound, you wonât have to turn as much money over to your lender. And the sooner you pay off your car loan, the less interest youâll pay overall. You can also speed up the process of eliminating your debt by making extra car payments (if thatâs affordable) and refinancing to a shorter loan term.

An amortization schedule is a table that specifies just how much of each loan payment will cover the interest owed and how much will cover the principal balance. If you agreed to pay back the money you borrowed to buy a car in five years, your auto loan amortization schedule will include all 60 payments that youâll need to make. Beside each payment, youâll likely see the total amount of paid interest and whatâs left of your car loanâs principal balance.

While the ratio of whatâs applied towards interest versus the principal will change as your final payment deadline draws nearer, your car payments will probably stay the same from month to month. To view your amortization schedule, you can use an online calculator thatâll do the math for you. But if youâre feeling ambitious, you can easily make an auto loan amortization schedule by creating an Excel spreadsheet.

To determine the percentage of your initial car payment thatâll pay for your interest, just multiply the principal balance by the periodic interest rate (your annual interest rate divided by 12). Then youâll calculate whatâs going toward the principal by subtracting the interest amount from the total payment amount. 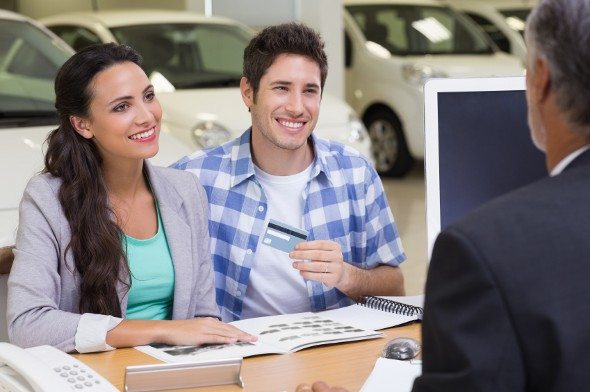 Auto loan amortization isnât nearly as complicated as it might sound. It requires car owners to make regular payments until their loans are paid off. Since lenders arenât required to hand out auto amortization schedules, it might be a good idea to ask for one or use a calculator before taking out a loan. That way, youâll know how your lender will break down your payments.

Update: Have more financial questions? SmartAsset can help. So many people reached out to us looking for tax and long-term financial planning help, we started our own matching service to help you find a financial advisor. The SmartAdvisor matching tool can help you find a person to work with to meet your needs. First youâll answer a series of questions about your situation and goals. Then the program will narrow down your options from thousands of advisors to three fiduciaries who suit your needs. You can then read their profiles to learn more about them, interview them on the phone or in person and choose who to work with in the future. This allows you to find a good fit while the program does much of the hard work for you.

The post All About Car Loan Amortization appeared first on SmartAsset Blog. 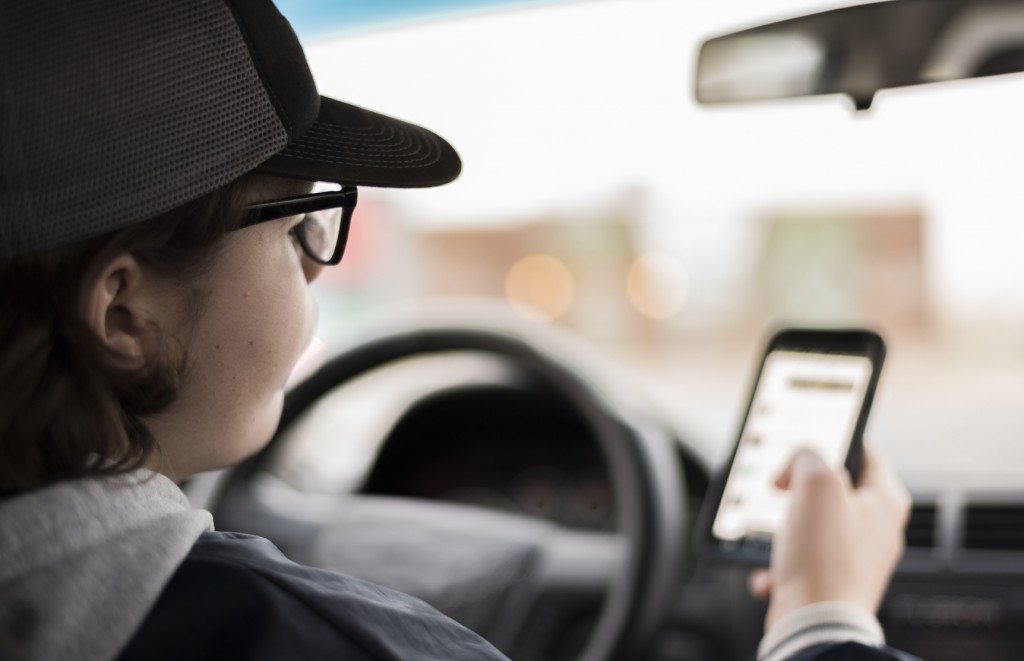 It is common occurrence on American highways for near-accidents to occur. It is also a common occurrence on American highways for people in near-accidents, to look at the license plate of the near-accident-causer and think to themselves, âOh, well of course theyâre from Massachusetts.â Or some other state. It seems like almost every state has a reputation for having terrible drivers. Thanks to data from the National Highway Traffic Safety Administration we can confirm some of those myths and dispel others.

Looking to move? Check out mortgage rates in your new area here.

According to the National Highway Traffic Safety Administration around 32,000 people were killed in vehicle-related incidents in 2014. Of course some incidents are genuinely accidents, while some are clearly the fault of one driver, like in the event of drunk driving. But deaths and DUIs are not the only metrics to measure bad driving, people who receive speeding tickets or do not have automobile insurance can also be considered negligent drivers.

To find the states with the worst drivers SmartAsset looked at number of drivers, DUI arrests, people killed, google trends in speeding tickets and percentage of people who have auto insurance. To find out how we put all these numbers together to create our index please read the full methodology below.

No Massachusetts. Boston drivers usually have a reputation as bad drivers but the numbers we analyzed donât bear that out. Massachusetts ranks 48 on our list. While we have no data on non-fatal accidents, the fact that they lead the nation in insured rate is a positive sign. 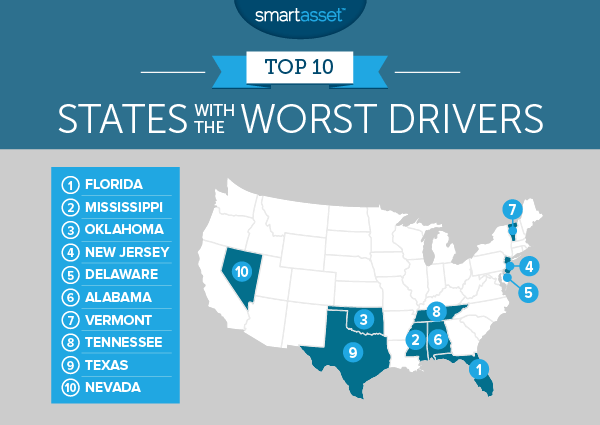 Florida is often plagued with a reputation for bad drivers. The numbers seem to show that this might, in fact, be true. Floridians google âspeeding ticketsâ and âtraffic ticketsâ more than any other state. They also have the second lowest number of insured drivers in the nation.

Another southern state and another state in which one ought to be extra careful when driving through. Mississippi had the 5th highest deaths resulting from vehicular incidents. One area where Mississippi can improve is in DUIs. Mississippi had the 12th highest rate of DUI arrests per driver in the country. Like Florida relatively few people are insured. They rank 3rd worst in that category with only 77% insured.

Continuing on the theme of states with low insured driver rates, Oklahoma has the least. Only 74% of drivers in Oklahoma are insured. It does not get much better for the state in the other categories we looked at. They have one of the 15 worst scores in DUIs per thousand drivers (7.74), number of people killed per thousand drivers in vehicular incidents (.21) and rate of googling parking and traffic tickets (52.13).

New Jerseys neighbor and rival for worst drivers in the northeast, Delaware is unfortunately the only state with more deaths per driver than New Jersey. One curious statistic is that while Delaware has the lowest DUI rate per driver, 40% of deaths occurred when the driver was above the legal limit for drinking, which is the 4th highest rate in the country.

Another southern state and a similar story to the others with pretty bad scores all around. One bright spot â Alabama has the 4th best score with only 1.42 DUI arrests per thousand drivers. Like Delaware, though, that statistic does not tell the whole story, 33% of deaths in Alabama resulted from a driver being over the legal alcohol limit.

Vermont leads the nation in DUIs per driver with 50 per thousand drivers. However, they also have the lowest percentage of deaths resulting from drunk driving, at 20%.

Tragically for Texas it has the highest percentage of deaths coming from drunk drivers at 40% and yet it is in the better half of states for DUI arrests. Recent news that Uber and Lyft will both be leaving Austin may have an impact. According to MyStatesman, Austin only has permits for 756 legal taxis and is hoping to increase that to 1,161. But for a tech hot-spot with a population of 850,000 even this may not be enough.

Nevada is the 3rd worst state for traffic and speeding tickets (when comparing googling trends) as well as being the 17th worst state for DUIs. The good news is that 88% of Nevada drivers are insured. 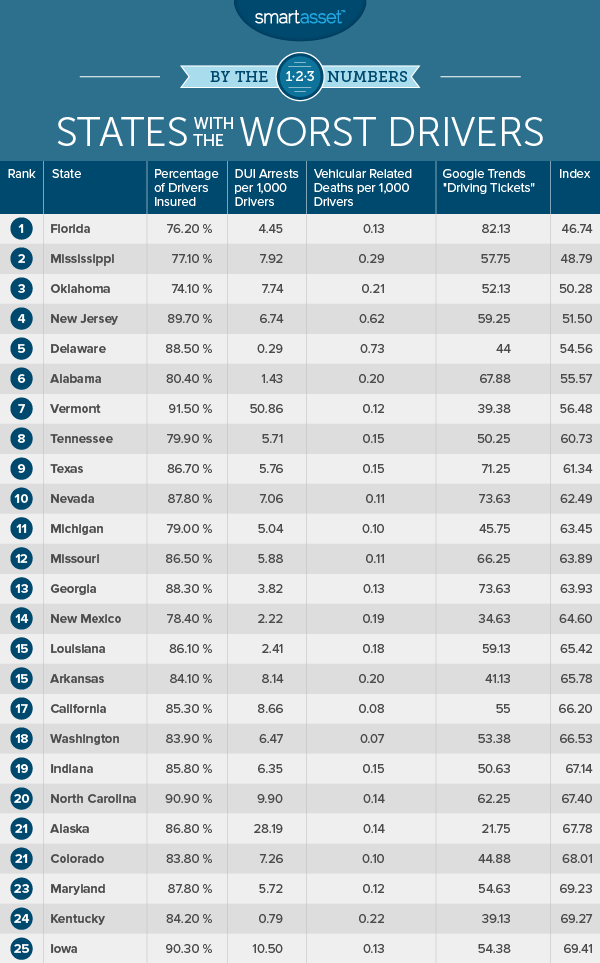 In order to find out which state had the worst drivers SmartAsset collected data across 4 metrics.

Percentage insured. Data is taken from the Insurance Research Council.

Deaths per thousand drivers. Data is taken from the Fatality Analysis Reporting System, which is part of the National Highway Traffic Safety Administration.

We then indexed each factor for every state giving equal weighting and then finding the average score per state to create the final index.